A trip to the Red Centre aka Baby Sensory #softplayarea 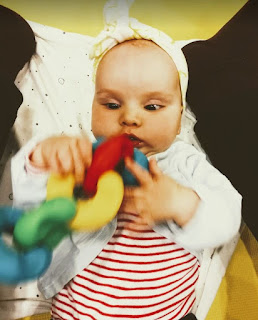 Baby Sensory has somewhat of a famed presence amongst new parents - I've heard more parents talk about this class than any other - so I was definitely keen to get down with MC and check it out.

The lads from back home (Hull) were asking me what Baby Sensory was, which sparked the following WhatsApp group exchange: 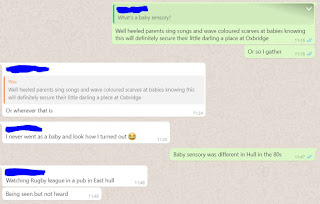 In reality, the class basically involves singing songs and a playing with toys with your baby; it was certainly a great class for getting some new weapons in your baby entertainment arsenal.

There was a good number of parents/babies (around 10) and good mix of baby ages - some older / some younger than MC.

A little more expensive than some other baby singing type classes but, all in all, no complaints and worth doing.

The only (minor) gripe I had was a nagging feeling that it all felt a little bit mollycoddled.

Fair enough, new parents are a nervous bunch, but I'm not sure whether that nervousness is served best by having (pseudo?) science justifying the choice of every activity / song: can't babies just do the Hokey Cokey because it's top bants, as opposed to linking it to the development of every neuron in their brain and hastening their path to becoming a mythical Super Baby?!

All this reminded me a bit of the childbirth scene in the recent TV adaptation Handmaid's Tale (I have a dark mind, apologies) lots of cooing and breathing and soft edges and tinkle tinkle music. That's great - but MC loves a bit of action too!

Recommended?: It's a right of passage and it's definitely a good way to fill an hour with old baby chops, though I would also mix it with some more raucous music classes.