Alice talks to me about her experience of SPL #newperspectives


MC and I went to Hackney City Farm to catch up with Alice and her son Rhys.

Alice is currently taking 3 months’ SPL and, being one of two mums, in a same sex relationship, Alice has a unique and interesting perspective on the situation.

Alice talked, with an admirable openness, clarity and strength, on the complex and sensitive issue about the potential for being labelled as “Mum Number 2” and how her Shared Parental Leave has helped her family reinforce the definite fact that both her and her partner are equal in their parenting roles.

Chatting with Alice certainly opened my mind to some new perspectives and quite simply enhanced my view that Shared Parental Leave is an excellent phenomenon.

A summary of our conversation is below. 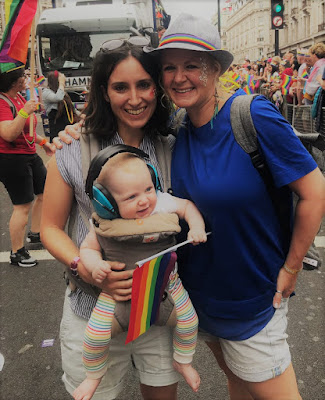 I’m in a same sex relationship with Liz. Liz gave birth to our first child, Rhys, 10 months ago.

Liz and I both work at the same NHS hospital in East London.

We live in Islington, London.

How did you divide your shared parental leave?

The original plan was that Liz would take the full maternity leave (i.e. 12 months) but we actually changed our minds halfway through and I sneaked on the end and took the last 3 months (being months 9 to 12 of Rhys’ first year).

Your typical day on SPL / what activities do you get up to?

When I took over, Liz had already established a good routine. Rhys and I follow quite a clear daily structure with feeding and Rhys’ naps but I try and do something fun in the morning and afternoons.

I've had the summer months as well which has been great, when the sun is shining! We have been meeting Liz in the park after work, and sometimes going for a swim in the lido.

We do a few things that Liz hadn't been doing. For example, we’ve been doing the local library Stay & Play sessions (which is a good way of saving some money, as they’re free). We’re also doing the sing-a-long sessions etc. It’s great to meet other people with babies and chat to other parents. I also do a lot of catching up with friends with babies.

I was a bit apprehensive about going to the same groups that Liz had been to with Rhys. I had a fear that people would think I was the childminder and that when explaining myself I would encounter homophobia. I haven’t actually had to explain in any of the groups but doing SPL has made me feel more confident about broaching these conversations when they do arise.

Did your employer provide enhanced pay for SPL?

It’s an unpaid 3 months for me. Liz was paid statutory & nhs maternity pay over 9 months, which was the whole amount available. I don’t know if I could have been paid if she hadn’t taken it all.

Was SPL encouraged informally - did you feel supported by colleagues / managers?

I could not have been supported more by my colleagues and organisation. My boss (male) was completely behind me taking it, which is great.

HR were also very flexible and accommodating with our short notice period.

Had anyone else in your team/company taken SPL?

The NHS is obviously a massive organisation and I’ve heard of people taking it, but I personally don't know anybody else that has taken SPL.

Have you inspired others to take SPL?

I actually don't know. I work in the female-dominated profession so the expectation is simply that women will take maternity leave when having a baby. We will have to see when I return to work.

If moving job, would a prospective different employers’ SPL policy affect your decision about moving company?

It’s funny, you don’t think about these things before having kids, but yes, I would consider this now.

The effect of SPL

I guess I come from a different perspective to some of the other people that you will interview.  When you're the “Dad” there is an accepted role that a Dad traditionally occupies. However, things are different for me. My son already has a mum, I am trying to be my son’s mum as well - so he's got two mums.

An “issue”, if you can call it that, which I contend with is knowing that I am Rhys’ mum but I can’t breastfeed him, I didn’t give birth to him and he doesn’t look like me.

SLP for a dad is maybe enhancing the dad role. For me, SPL has been about forming my role in our family, independent of Liz.

People have referred to me as the “Birth Partner” but - whilst I was the Birth Partner ten months ago - I’m not a “Birth Partner” now, I’m Rhys’ mum. There might be a perception that there’s Mum 1 and Mum 2, and I’m Mum 2 because I’m not the birth mother. However, by spending more time with Rhys on my own (something which SPL has really helped with) this “concern” has reduced and I feel much more equal in our respective parenting roles.

Do you feel more involved / confident about looking after your child as a result of your SPL?

I managed to take quite a bit of annual leave in his first 3 months, and since then I have been working 4 days per week, so I feel like I’ve always spent quite a lot of time with my son.

However, a big difference is that previously, when I was with Liz, I might find myself checking with her about certain childcare aspects, but when you’re on your own, you just have to deal with it.

I feel so bonded with Rhys as a result of having this solo time with him. It was like that before - but the SPL period with him has helped develop that bond much further. I would really recommend SPL to anyone in a similar situation.

Why do you think SPL take-up is so small?

I guess things like pressure, or an imagined pressure, on partners to stay in their jobs or a fear that they'll lose their career prospects.

A lot of people don’t have the option of taking unpaid leave, which may mean SPL is out of the question if your organisation doesn’t provide paid SPL.

It could also be women saying “I’ve carried this baby for 9 months, I want the whole year with them!”

If there was a defined period of leave for partners - would this help take-up?

Yes, I would think if that if that came into play, take up would be huge.

Should large businesses be forced to publish their SPL policies - would that be helpful to compare when looking at prospective jobs?

Yes, they should publish - this would be helpful.

What is the longest you have ever had to look after your child for on your own?

48 hours. [Dadonspl’s view was that this is an epic challenge!]

Cleaning food off the floor - I mean #relentless

Would you recommend SPL to others? 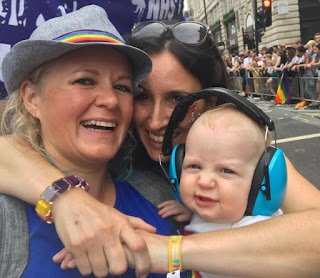