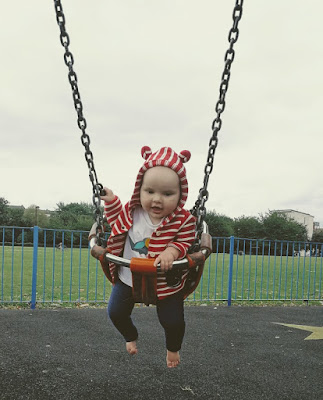 Readers will probably be reassured to know that the number of visits per week to children's playgrounds I make has seen an exponential increase in recent months (see fig. 1 below).

From barely knowing that these playgrounds existed, there's now a fair chance you'll see me and MC for at least an hour a day hanging out on the swings, slides etc. at Weaver's Fields, Ion Square Gardens, and - the pinnacle of East London's playgrounds - Victoria Park.

This new keenness for all things metal and multicoloured has exposed me to the thorny and complex sub-culture of playground etiquette.

I'm not sure that I'm nailing all the intricacies, but I've picked one thing up pretty quickly - don't hog the baby swings. One sure fire way to piss off a parent more fluent in the language of playground etiquette is to let your little darling's excitement get the better of you and spend longer than a "reasonable" amount of time on the swing.

Even worse would be letting your child, who is capable of playing on the big boy/girl swing, have some swing time on the sought after baby swing.

Now, the tricky bit for newcomers is what a "reasonable" time on the swing is. There's a lot of factors to take into account - but my top tip for success is if the person on the swing next to you has been in situ longer than you have, you will be spared the ire of the onlooking buggy pushers. However, as soon as you've been there the longest, you need to get ready with some other A-game swing delaying tactics. Basically, start bringing out the "Ok, last swing!", "Ooh look we need to go now..." - this will buy you a couple of extra minutes.

Another potential pitfall on the swing is how high to swing your child?! MC loves all things action, so I've got no qualms in aiming to get her as close to parallel with the floor as possible. This has led to some disapproving looks: some parents are seemingly content to keeping swinging to a mere 100cm pendulum. Where's the fun in that?!

It's a minefield guys! 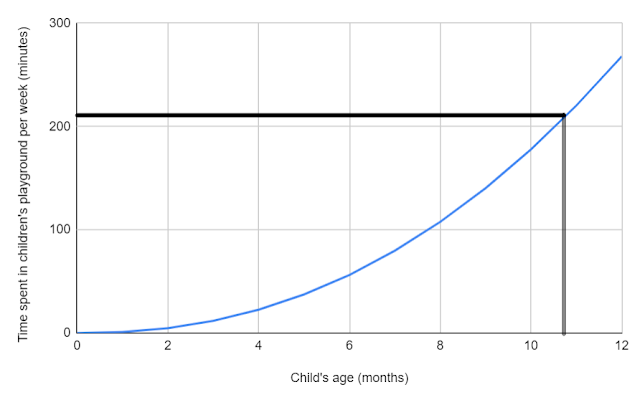 For the geeks like me - here's the scientific analysis.

Through vigorous and extensive research, I've determined that the following exponential relationship exists between your child's age and the time you spend in children's playgrounds:

No one has yet disproved my theory.