Keen to avoid the "Dad Spread" (Google reliably tells me that new Dads gain 8.5kg on average after breeding), I've been keeping up the regular jogs around the beautiful Victoria Park in East London.

I'm trying to keep under 8 minute miles - which is becoming increasingly difficult now that MC is gaining the kilos herself. The last run I did I flipped MC around so she's fully front facing - wind in her hair - as I'm racing along. This led to a lot of waving at randoms and pointing at dogs! Something that she, the dogs, and invariably the randoms in question, are really enjoying at the moment. 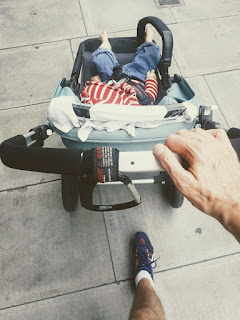 En route to the park, running through the mean streets of Tower Hamlets, some local East London rude boys pulled up at the traffic lights sitting on chromed out 20s and pumping out some Grime beats that would make Stormzy proud*. Taking a glance at me running with MC, the driver shouted a sincere "Respect Bruv, innit." upon which the passengers all gave me a nod of appreciation.

With a wry smile, I simply gave my holmes (yes, this is the correct spelling) a hearty "Thank you" and jogged on. 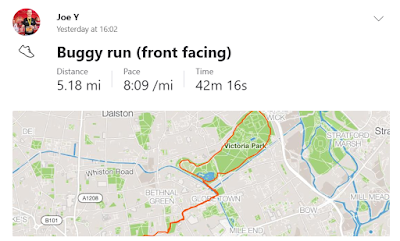 * For all I know about Grime, it may well have been Stormzy himself on the radio!
Labels: Lifestyle