Over the noughties and 2010s, the phenomenon of the "push present" has arisen. For those not in the know (like me, in advance of this baby thing), a push present is a gift you give to your partner on account of her putting her body through childbirth.

Wikipedia tells me that 38% of new mothers received a push present, and 55% of pregnant mothers wanted one. That means 17% of new mums wanted a push present and didn't receive one. Dads - ask yourself - do you really want to run the risk that your partner is in the 17%?

You might be thinking, like Valentine's day, this is just some hyped up nonsense being driven by the evil capitalist forces lurking behind every shop doorway. In any event, I'd suggest that you want to get things off to a winner with your partner - so buy a damn present folks!

I thought I'd treat TP to case of Rioja that we'd enjoyed a few times on our previous holidays in Spain. I duly ordered online in good time and waited for the vino tinto to arrive. All I can say is it's a good job that MC rocked up two weeks late - had she arrived on time, I would have been making a hasty trip to the newsagents next to the hospital to buy TP a card and a bag of M&Ms. No doubt, this wouldn't have gone down as well.

Around 8 days after the due date, the wine arrived!

As discussed in a previous post, MC was unfortunately in the neo-natal intensive care unit for a few nights upon arrival. We decided to delay the opening of the push present until we arrived back in our own home. This was a lovely moment for the three of us. Some serious Dad Brownie Points banked!

I think we managed about half a glass each before collapsing in bed! 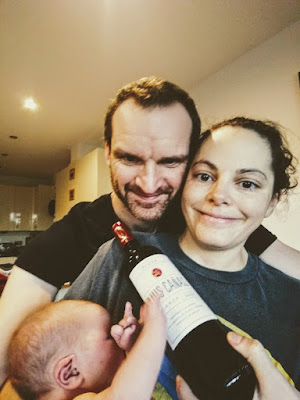