Stephen Daniels, Asset Manager at Hammerson, talks to me about his Shared Parental Leave #100%

This week, MC and I met up with Stephen Daniels and his son Oscar in London Fields to chat about Stephen’s experience of taking Shared Parental Leave.

Stephen was very positive about SPL and raised an interesting point on the lack of changing facilities available in men’s toilets #feelyourpain. 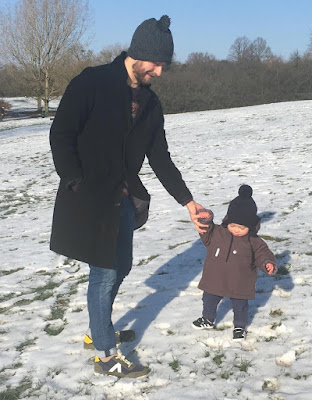 My name is Stephen, my wife is Paula and our son is Oscar who is 23 months old.

We live in Walthamstow, East London, and have been there for about 18 months - and life is good!

I'm a Chartered Surveyor and Asset Manager at Hammerson plc, specialising in retail property assets. We create destinations people want to be and I manage some specific projects around the UK.

Paula is a lawyer; she's a contractor currently working in-house for a publisher, which has some flexibility in the hours and really suits our lifestyle.

How did you how did you structure your Shared Parental Leave?

It wasn't an easy thing to decide. In the end we structured it as follows: I had six weeks quite early on in Oscars life, and then a further six weeks towards the end of his first year.

So I took 3 months in total split into two blocks.

Did Hammerson provide enhanced pay for this Shared Parental Leave?

Did you feel that shared parental leave was encouraged informally within within your firm and did you feel supported by colleagues / managers in taking SPL?

I was an early adopter of SPL: my first batch of SPL was back in the winter of 2017. As I remember, our company policy had only been in place for about 6 to 9 months and there was only one other Dad that I was aware of at Hammerson that had taken SPL at that time.

I think, in truth, the introduction of an SPL policy felt like a box ticking exercise to keep up with the legislation initially when the company brought it in. There wasn't really much made of the opportunities it could give you either as a mother or a father but nevertheless was visible and available.

However, whether it was intentional or not, the SPL policy that Hammerson introduced is incredibly good and, to my knowledge, a leader in the market. This was certainly an incentive to go ahead and look into taking it.

Regarding the non-financial support side of things, as one could imagine given it was such a new piece of legislation, there were some people in the business (many of whom I would put in the “40 plus” category) that appeared a bit aggrieved that they missed out on this opportunity themselves. These people were at least verbally supportive but probably a little bit pissed off inside.

That said, there were plenty of people both male and female and at high levels in the business that were super-supportive and really keen to chat about what I got up to during my Shared Parental Leave.

There were also the more conservative people that didn't really get SPL and made that quite visible.

At the time that you took SPL, who else at your firm had taken it?

I think there was one other person right before me, but that was it.

How was your return to work; was it daunting?

The first block of SPL I took was over the Christmas holiday period. The property industry, like others, almost shuts down over this period. So, for all intents and purposes, a lot of people saw my first chunk of SPL as almost an extended Christmas break..

However, I think the second the second block was quite different. The leave came at a busy time of the year. I wasn't nervous at all about coming back; I didn't feel like I had taken advantage of anything I shouldn’t have but I certainly had to answer more questions than I thought I would have done about why I took the time off and missed the start of business planning cycle (coming back in September).

Personally, I was fine and not daunted: I felt quite fresh and came back in with a bit of head space.

Have you inspired others at Hammerson to take SPL?

I hope so. Since I took my SPL, plenty of other people have taken it. There has been a wave in the last 12 months: four Dads took it last year.

I guess it always helps uptake seeing other people do it.

Has the uptake helped a change of attitude towards SPL within Hammerson?

Yes - I think I probably have at least one chat a month with someone in the business who is either approaching a time frame where they can take SPL or is just thinking about having a family and wants to understand what the SPL policy is all about.

I understand that Hammerson gives 6 months full pay, which is market leading?

Yes - it is excellent and I've never really got to the bottom of just why they enhance pay to that level. Hammerson is pretty forward thinking in sustainability and well-being particularly around the properties we own, so it's nice to see that mentality drifting into the head office environment.

Are you proud of you company's SPL policy and do you talk positively about it to people outside your company?

I think I'm probably prouder of it than the company is!

If you were to move to a different firm, would a potential employers SPL policy affect your decision to move?

Yes it would. I think timing is everything (i.e. with regards to family planning).

Tell me about a typical day on Shared Parental Leave for you?

In the first period of leave, Oscar was very young (2-3 months old) so my wife was also around most of the time. It was more of a joint caring thing

In the second batch of leave Oscar was 8 to 11 months old. I think there's the “administrative” routine that comes into it - the morning and evening routines had already emerged and I was familiar with certain things like nappy changing timings during the day etc.

Aside from the “admin” stuff, it was all about variety: it was meeting up with as many people that were in similar situations (predominantly the mums within our NCT group) and other mums that I knew that were off at the same time. No other dads were off actually.
We'd also go to classes like swimming or we’d play football.

It’s really hard to describe a typical day but they were always interspersed with periods short bursts of real fun and excitement with periods of, as I call it, the baby “admin”.

Was there anything that you felt, as a Dad, you couldn't do?

I think the only thing that was really obvious to me from quite early on was when it comes to facilities in a public spaces, child changing facilities in the gents' toilets are much less frequent than in women’s toilets. This was the main difference for me.

I think we’re fortunate to live in London, being a place that is pretty progressive and liberal and so there's no separation between what a mum or dad can do.

After those two periods of SPL, did you feel more confident about your childcare abilities with Oscar?

When you are in sole charge of your child for ten hours a day you just have to get on with it. The first time anything happens is always uncomfortable. For example, the first time you're in public and he craps his pants, your flapping around and you don't really know what to do - but the next time, you’re like a pro!

Worries about looking after Oscar don’t even come into my conscience now. For example, one day Oscar’s nursery unexpectedly closed and they asked parents to come and pick up the kids. I took him on my own it was not even an issue that I didn't have my partner there to support me.

Can you see any reason, other than financial impact, why a dad shouldn't take shared parental leave?

No… though it depends how confident they are to face people in their life that may not be fully supportive of SPL because it's still not a traditional thing to do.

Most people in my life currently (i.e. in my peer group) would not be fazed by SPL at all and I hope that would be the case for other people. I guess your own self confidence would be the biggest enemy.

Why do you think take-up is so small?

Financial reasons. Many people are not as lucky as me and don’t have enhanced pay for SPL.

I think there's also some societal trends to overcome. Some mothers don't really want to give up the 12 months of leave; I think they feel they might be entitled to it and it’s difficult to argue against that… but SPL is there to try and break down a few of those barriers.

Would it be helpful to have a defined period of leave for only the Dad?

I don't think my decision-making would have been different as, for me, there was an opportunity to get stuck in, which was something I wanted to do.

I knew it would help me in the future to be more comfortable with the parenting thing and if you look at it objectively I don't see many reasons why it wouldn't give people a clearer head as to whether they want to do it or not.

What is the longest you've ever looked after Oscar on your own?


If you could only ever use one ever again, would you use the buggie or the baby carrier?


In your view, who would make the better dad:


Finally, would you recommend SPL to other dads?