This week, MC and I caught up with James and his daughter Mabel to chat about their experience of taking Parental Leave in Australia.

James makes noteworthy comparisons about the community setup for families in Australia and a very interesting point that a firm's parental leave policy would be a factor in his decision when choosing an employer - regardless of his future family planning considerations. 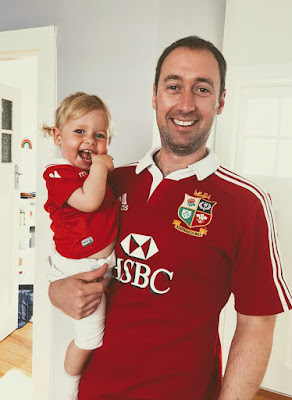 There’s me, my wife Kate and our daughter, Mabel, who is 16 months old... and our dog and 6 chickens!

I’m a Senior Analyst at Cbus Super Fund, an “Industry” Pension Fund, as they are called in Australia. Kate is a full time nurse and manager of her unit.

We previously lived in the centre of Melbourne where we enjoyed walking to work and city lifestyle. Since having Mabel, we bought a house an hour away in a coastal town called Geelong.

I’m originally from the UK and my family is still there. Kate’s Australian and her family is in Queensland, a 2.5 hour flight away from Melbourne, so we’re very much on our own from a family perspective.

How does parenting in Australia compare to the UK?

I have a good point of comparison as my sister lives in London and has an 18 month old child (so a similar age to Mabel). They seem to do things quite differently to us and I think environmental factors play into this, as opposed to my sister just having a different personal approach.

Firstly, I’m really happy and impressed with the parenting community here in Melbourne/Geelong, which is often based around the activities on the beach in summer or other non-home bound stuff other times of the year.

There’s a lot more community based shared resources for children here, that are common and affordable, whereas I understand this isn’t the case in London. For example, we’re a member of a toy library and do 4 volunteer shifts a year in exchange for rental of toys (which includes a bouncing castle!).

Another good example is the local libraries here are all sexed up and jazzy and engaging for young people, which is not my recollection of libraries in the UK, or the sense that I get from my sister. We’ve been surprised by the ‘hand me down’ expectation between friends so there’s certainly a lot less pressure to buy new clothes, toys and equipment etc here in Australia.

What is the broad culture around Dads getting involved in parenting in Australia?

To give a concentrated sample, I know around 15 people within my peer group with kids of a similar age to Mabel. These people are in all types of employment (or unemployment), and all have a varying degree of parental leave benefits available. However, considerations of benefits available were outweighed for all by the decision for the Dads to take some leave.

In my own personal experience [in Australia it’s the law that if you’ve been with an employer 12 months you’re entitled to 2 weeks paid leave], when Mabel was born, I had been working for my previous employer for 9 months. I asked my former employer for the two weeks paid leave and they rejected this, saying that I had to use my annual leave. This has knock-on effects for holiday entitlement later on. Whilst I would take the leave again in the same situation, being able to take the leave without being forced to take holiday would have made such a difference to how things felt for me and my employer at the time.

By comparison, a friend of mine took 3 months paid leave following his wife having a problematic birth. Whilst he said it was the most amazing time, with a second child he wouldn’t do it again, so everyone is so different.

Change seems to be happening very quickly, especially with big some corporates. Recently, a large bank announced an updated policy, as have other well-known global corporates. These issues are also receiving quite a lot of coverage in the press.

Social issues in general are getting more airtime, such as high profile sports people speaking out to raise awareness. This has sparked a public discussion about men’s mental health more generally and which has included the importance for men of spending time with their young children, and their first child in particular.

What parental leave benefits does your current employer provide?

My current employer pays 16 weeks full pay from the birth date, regardless of whether you are the primary or secondary carer. Typically the leave must be taken within 24 months of the birth. This leave can also be taken at half pay. Previously secondary careers couldn’t take leave at the same time as their partners, but the fund changed this after feedback from staff. Someone here had triplets and it didn’t make sense to deny him leave at the same time as his partner. From what I hear people enjoy the added flexibility.

Have colleagues at Cbus taken advantage of the paid leave?

I’ve only been there for 5 months, but I already know one person who has taken advantage of the policy. I believe all employees would be understanding of the potential impact on their team and requirements to work during busy periods where required because of the policy being in place.

If you were to move to a different company, would a potential employer’s SPL policy affect your decision to move?

If I were to have more children, it would be a primary consideration.

And, even if I didn’t have more children, it would still be an important consideration: if the parental leave benefits offered were good, I would know the culture of the company would be right for me.

For example, my company is what’s known as an “Industry Fund” in Australia - essentially, we’re not for profit in that all profits go back to the members of the pension fund. We’re very much a values driven organisation.

If I were moving to another large corporate that was not ostensibly values driven I would have to seriously consider the parental benefits available; I would want to get comfort that the culture of the firm would be right for me.

Tell me about a typical day looking after Mabel?

Kick off is anytime from 6:00am at the moment and the breakfast buffet is rolled out between 6:45-7:30am. Breakfast can last anywhere from 10 minutes to a good hour!

Then it’s out for a coffee and to walk the dog; we then might go to the park or beach if nice outside, have a little snack, and then return home. We often spend time in the garden before the buffet cart arrives again for lunchtime, which is akin to feeding time at the zoo - I’ve been having so much fun recently throwing food around with Mabel - and having food thrown at me! The dog is loving life!

Mabel’s only napping once a day now - usually after lunch, so I get to read the paper/check emails.

After lunch, we might head out for another walk, probably another coffee, and then back home for the last session on the day.

Dinner is another buffet cart… another test of making eating entertaining. This can be hard work, doing it repeatedly! Thinking of meals Mabel will eat is often harder than it sounds.

Was there any child care tasks that you felt less comfortable/less able than your partner in doing, and vice versa?

In the earlier days - singing nursery rhymes: I’m dreadful, I don’t know the words, I’m not animated... I’m just a bit too stiff! I went to “Rhyme Time” at the local library on my home working day. I was so out of my depth! I was sweating and getting the words wrong, and to make it worse there were two other Dads who were “Dad Intimidating” me - they were doing all the actions to Incy Wincy Spider and knew all the words too… I was awful!

But… just generally being silly and making Mabel laugh - I’m great at that! Mabel loves to see me falling over!

What is the longest you've ever looked after Mabel on your own?

If you could only ever use one ever again, would you use the buggie or the baby carrier?

In your view, who would make the better dad: