The most frequent question I am asked about my Shared Parental League is "what is the Birthday Peg"?

I've set out an explanation below. It's a slightly longer read than my usual posts, so grab a coffee, give yourself 5 minutes and enjoy...

What is the Birthday Peg 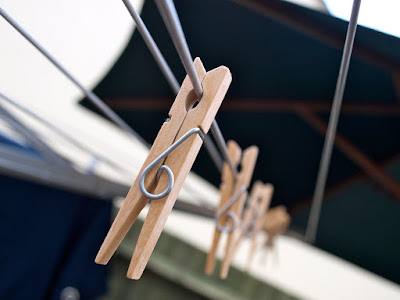 This is my phrase to explain a very common SPL policy flaw (often a result of copy/pasting from maternity policies) that pegs any period of enhanced paid leave to the birth date of the child.

For example, a company's policy might offer 26 weeks of paid leave to Dads BUT the policy states "The first 26 weeks following the birth of the child are paid" or similar. This means that once the baby is six months old - the Dad receives NO enhanced pay if he takes any leave in months 7-12 of the child's life.

For maternity policies, this doesn't matter because the mother almost ALWAYS takes maternity leave immediately after the birth - but this is not necessarily the case for Dads taking SPL.

Why the Birthday Peg is bad

The Birthday Peg is bad because it discourages the Dad from gaining experience as the PRIMARY caregiver.

Firstly, for the vast majority of couples, it is next to impossible for the man to be the PRIMARY caregiver in the early months. This is because of post-partem recovery, skin-to-skin contact, mother/baby bond, breast-feeding (should families choose to breastfeed), risk of post-natal depression etc.

The statutory paternity leave of two weeks off after birth is absolutely welcome. It is such a special time and helps fathers gain an immediate bond with their child. But a dad will quickly realise that he is the secondary caregiver during this early period.

It is in the later months when a man can fully occupy the role as PRIMARY caregiver. And, it is this period that will entrench equal parenting going forward.

The birthday peg prevents most men from being the primary care giver, as they are unlikely to take the early months off alone. Whilst this is not true for all couples (for example in Ali v Capita, the leading Court of Appeal case, there were specific health issues), it will be true for vast majority.

Secondly, if enhanced paid leave is pegged to the birth date, the cost to the couple is greater: the choice they are faced with at the end of the pegged paid period is (i) Dad is off work without pay, or (ii) paying child care fees, which can be expensive. This means a greater pressure for the Dad to continue working, rather than taking time off.

Thirdly, and perhaps counter-intuitively, daily childcare tasks and routines can often be more efficiently executed by one parent than by two (many interviewees have said this)*. Even when both parents are in the room, it is often only one parent that is "on duty", though who is on duty might change from minute to minute. This effectively leads to a "tag team" approach to parenting. Obviously, time together as a family is vital but - for the day to day routine of parental leave - often the "tag team" approach can be more efficient.

In addition, because babies more spend time with their mother in the early weeks, their bond will be naturally greater with the mother. This often means that babies gravitate towards mum, rather than Dad, when both parents are in the room - meaning that mum spends more time "on duty" when parents are together.

So, ff couples are encouraged by the Birthday Peg to take leave together, the Dad will be less likely to spend sustained periods of time being the PRIMARY caregiver to the child.

Why the focus on being the primary caregiver?

Through sustained periods of time being the PRIMARY childcare giver (I'm talking at least 8 hours a day for at least a few weeks), Dads:
Ultimately, Dads are likely to be more invested in childcare roles (or at the very least, have a greater appreciation of them) and appreciate that emotional support and physical presence are just as important and rewarding as providing for your family financially.

This change in culture will encourage Dads to demand the flexibility that has been traditionally left to Mums to demand from their employers. It will also mean that male employees have a greater appreciation of these demands.

It will also mean that employers will not see sex as an indicator of likely childcare commitments and reduce any existing ingrained bias.

All of these factors will contribute to the ultimate goal - achieving gender equality in the workplace.

Removing the birthday peg by allowing for the period of enhanced paid leave to be taken at any point during the birth year (or even after the birth year has ended as with Vodafone's and Standard Life Aberdeen's progressive market leading policies) gives couple the flexibility and the OPTION for the man to be the primary caregiver.

If your company is serious about increasing male uptake of SPL - and having more men share the joy of being the primary caregiver equally with their partner - removing the Birthday Peg from your SPL policy is essential.

+++
* This is NOT to be mistaken as saying that being a single parent (or co-parent) is easier - this is undoubtedly one of the toughest and bravest things an individual can do - but couples in a relationship will often say that tag teaming works for them.